It is not a sure thing that global growth slowed down in the first quarter of the year. After the euphoria of H2 2017, the economy needed some time to catch its breath, and it got just that. April data show that business activity has slackened somewhat. That doesn’t mean much, though, as it’s declining from abnormally high levels.

And then, market indicators suggest that the slowdown is only temporary. The U.S. yield curve—which is the best and most reliable benchmark—clearly indicates that there are no significant risks over the next 12-18 month horizon. Sure, they can always suddenly pop up due to whatever surprise policymakers have in store for us. But the usual economic flow of things shows no signs of trouble. 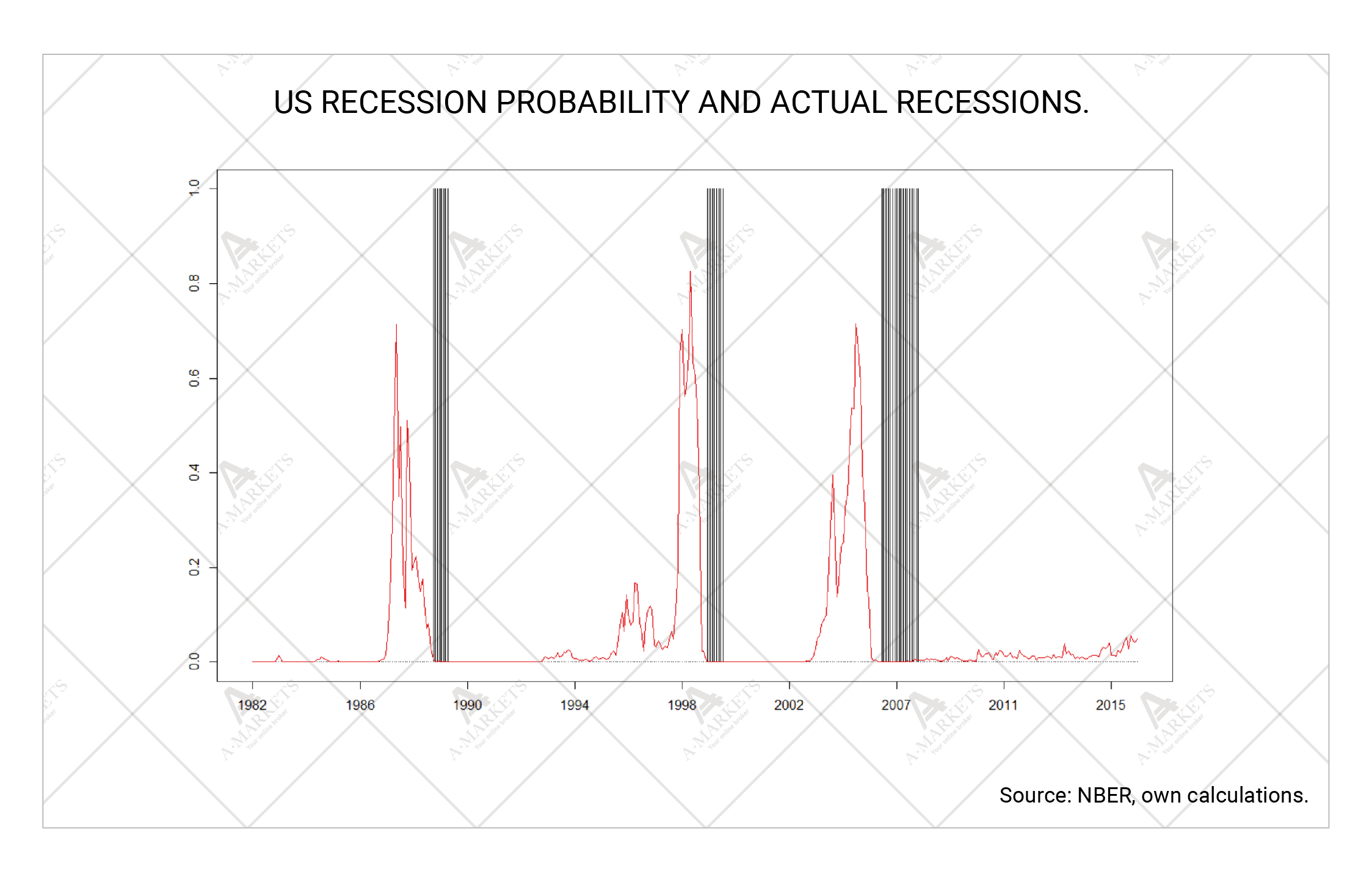 Under current uncertainty, though, global markets look shaky. Panicked by the epic sell-off in February, investors haven’t managed to regain the confidence to buy into whatever goes slightly down. Liquidity is contracting, and there hasn’t been any improvement in the real sector either. Taken all together, it creates sporadic sell-offs in a variety of market segments.

The Russian rouble has been hit the hardest and went into a brutal correction in April. The dollar and the euro have both gained about 10% on the Russian currency, while the country’s bonds tumbled by about 3% on average. This is officially explained by the new U.S. sanctions against aluminum giant Rusal, as well the geopolitical tensions over a suspected chemical attack in Syria’s Douma.

Sure, both of these stories have indeed been an important factor affecting the sentiment. And yet we can’t help but point out that the markets had been way too optimistic anyway. Let us remind you that yields on Russian eurobonds fell to levels below those before the Crimea events and all the sanctions. That was an unstable equilibrium, to say the least. As is always the case, the buyers eventually got a grip of reality, and the markets brutally repriced. 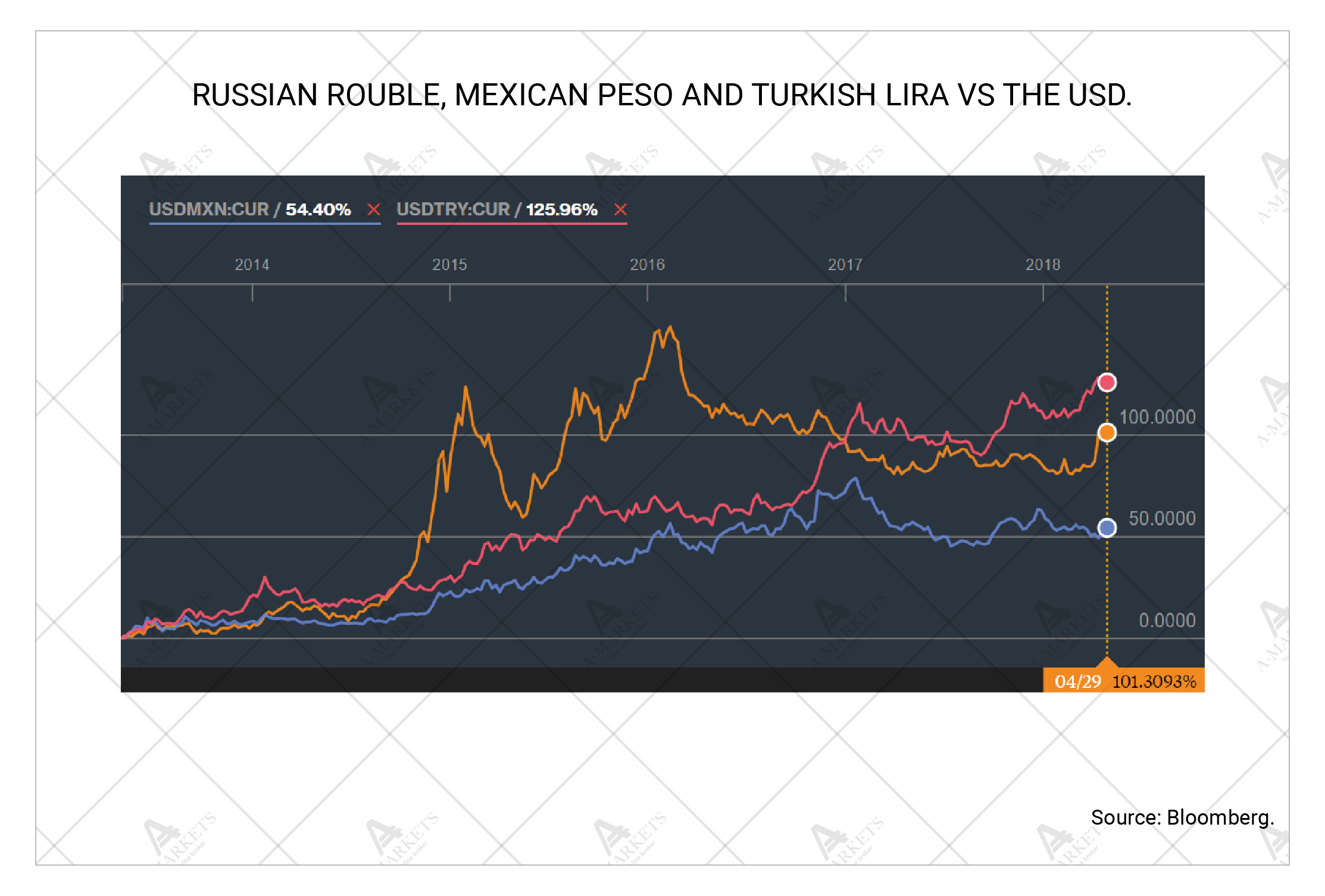 It is fair to state, then, that the reason for the rouble’s plunge hid in the unsustainably high asset values. It should be pointed out that Russia wasn’t the only EM market to face a brutal sell-off last month — Turkey and Mexico were a similar story. The lira hit an all-time low against the dollar; the peso suffered through much of April as well. This seems to suggest that currently there’s a threat to all EM currencies.

Broader market themes here are the ones that we have mentioned repeatedly in the recent editions of this publication. The first one is the painful process of QE unwinding by main central banks. Their balance sheets will have started shrinking by the end of the year. The market needs to discount that, and it normally takes 3-6 months to complete the repricing. Again, it is too early to expect risk appetite to stage a come back.

Investors also need hard proof that the economy isn’t going into recession, and the lags inherent to macroeconomic data imply that we won’t be able to do so for a while. As already mentioned above, the situation should return to normal in H2 2018. For now, however, we would recommend closely watching the numbers coming from the U.S., as it will likely be the first to recover, thanks to the recent
federal tax reform and higher crude prices. 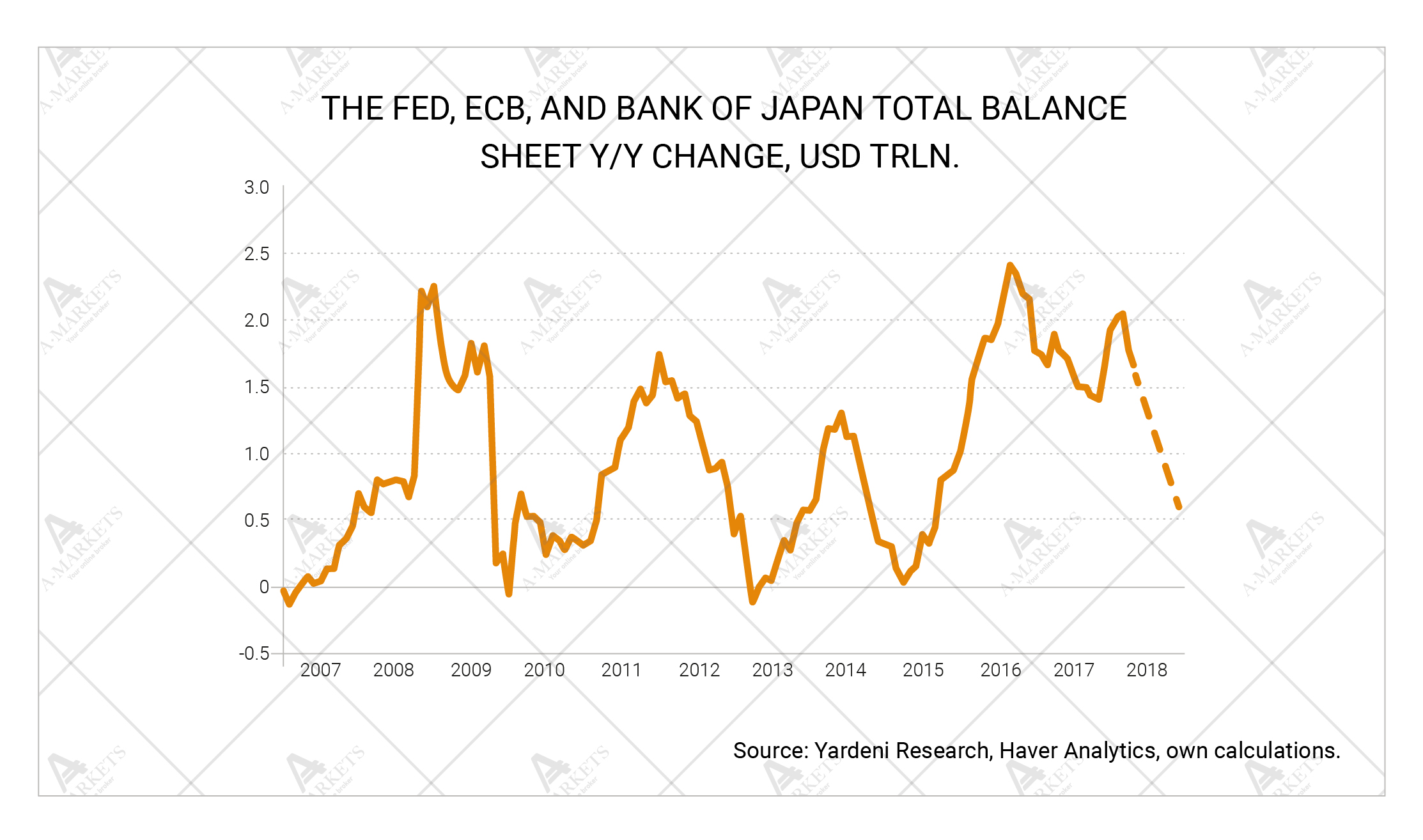 The oil market is another important story. The barrel keeps on reaching new highs with Brent trading around $75 at the time of writing. These levels are frankly surprising to us, but not completely unreasonable. One the one hand, there’s Syria and the Middle East in general. The geopolitical risks in the region are extremely serious and we don’t see the tension easing any time soon.

On the other hand, the demand for oil was strong in Q1, despite economic growth slowing down. Contrary to expectations, global oil reserves decreased in the beginning of the year and if this continues for at least 4-6 more weeks, stockpiles will fall to the 5-year average. Unexpected production drops have been observed in Brazil and Venezuela, and even the data coming from Canada is somewhat
disappointing. This means that the oil market risks registering a large deficit, and storages will need to be tapped. 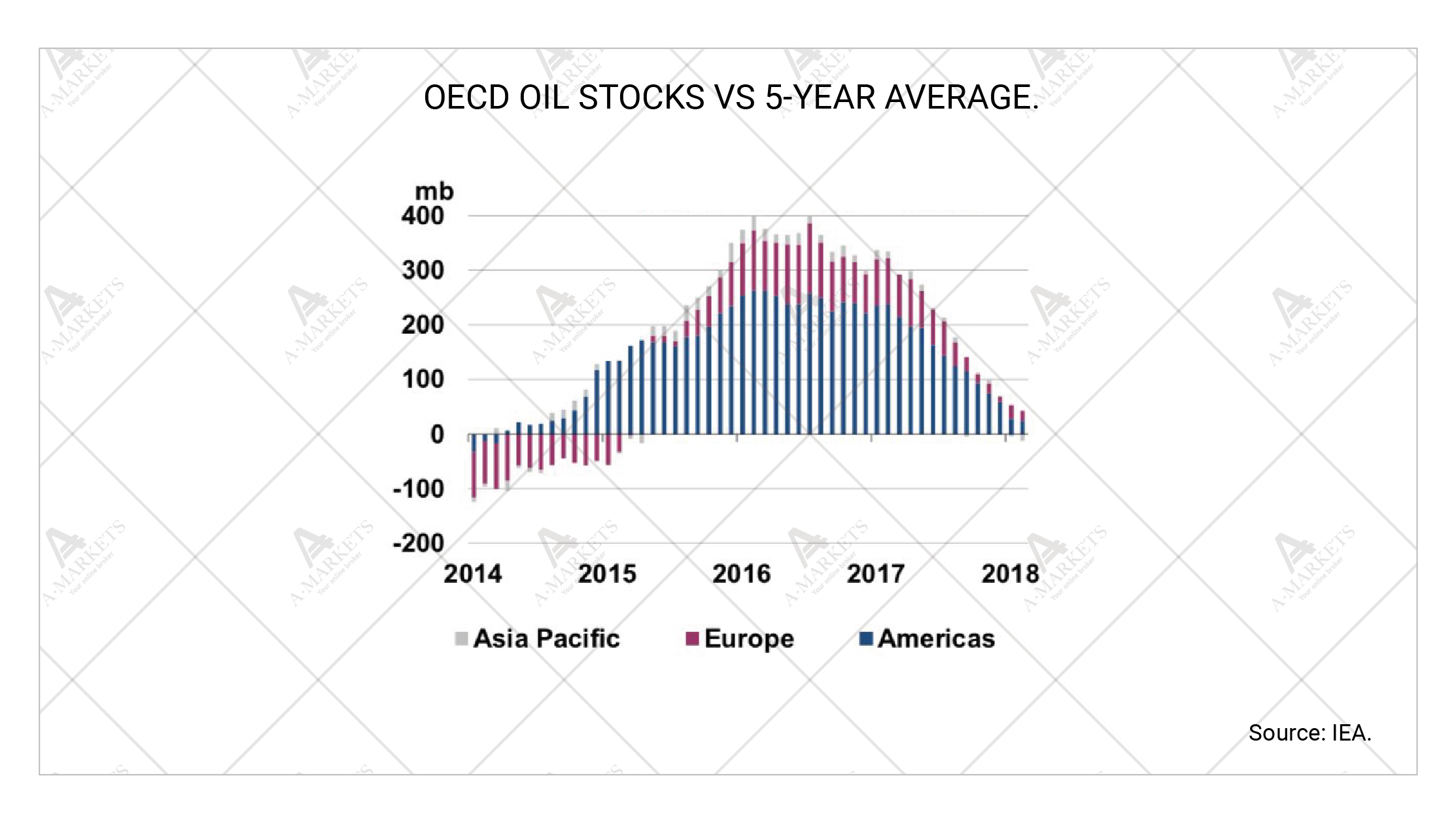 That’s most definitely very good news for the market. A demand/supply balance this tight in the face of convoluted geopolitics means that the current price levels are sustainable. They could go even higher if more unexpected developments erupt in the Middle East.

One exceptionally important consequence of here is the inflation implications. We may be in for a sharp spike in U.S. bond yields, similarly to what happened in February 2018. Back then the markets reacted to a rise in inflation expectations, and those are now going up again in tandem with oil prices. Estimating the sensitivity of the debt market is extremely difficult, but we another 5-10 dollars to the price of Brent more can be sufficient to trigger another bond sell-off. 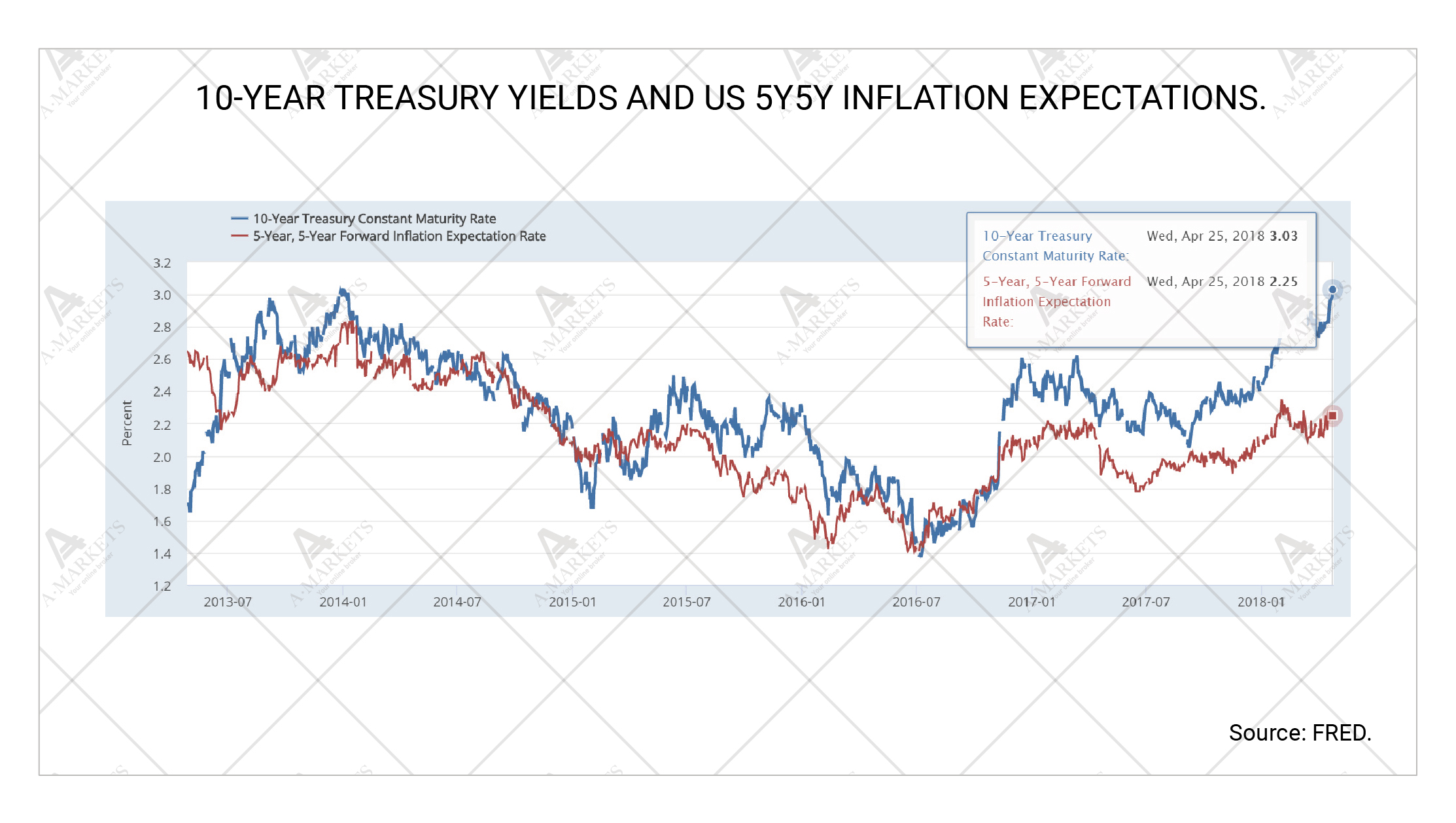 In fact, the timing and the magnitude of these sell-offs is the key to the market dynamics in 2018-2019. Again, we believe that investors will remain relatively calm for now and gradually reprice yields. The 10-year U.S. Treasuries could hit 3.05%, meeting the upper line of a multi-year downward channel. A very significant macroeconomic change has to happen in order for this to be broken. But they are not unthinkable. One example here could be a more aggressive Fed tightening, combined with a large U.S. budge deficit. This mix would be truly dangerous. But that’s a story for the next year. 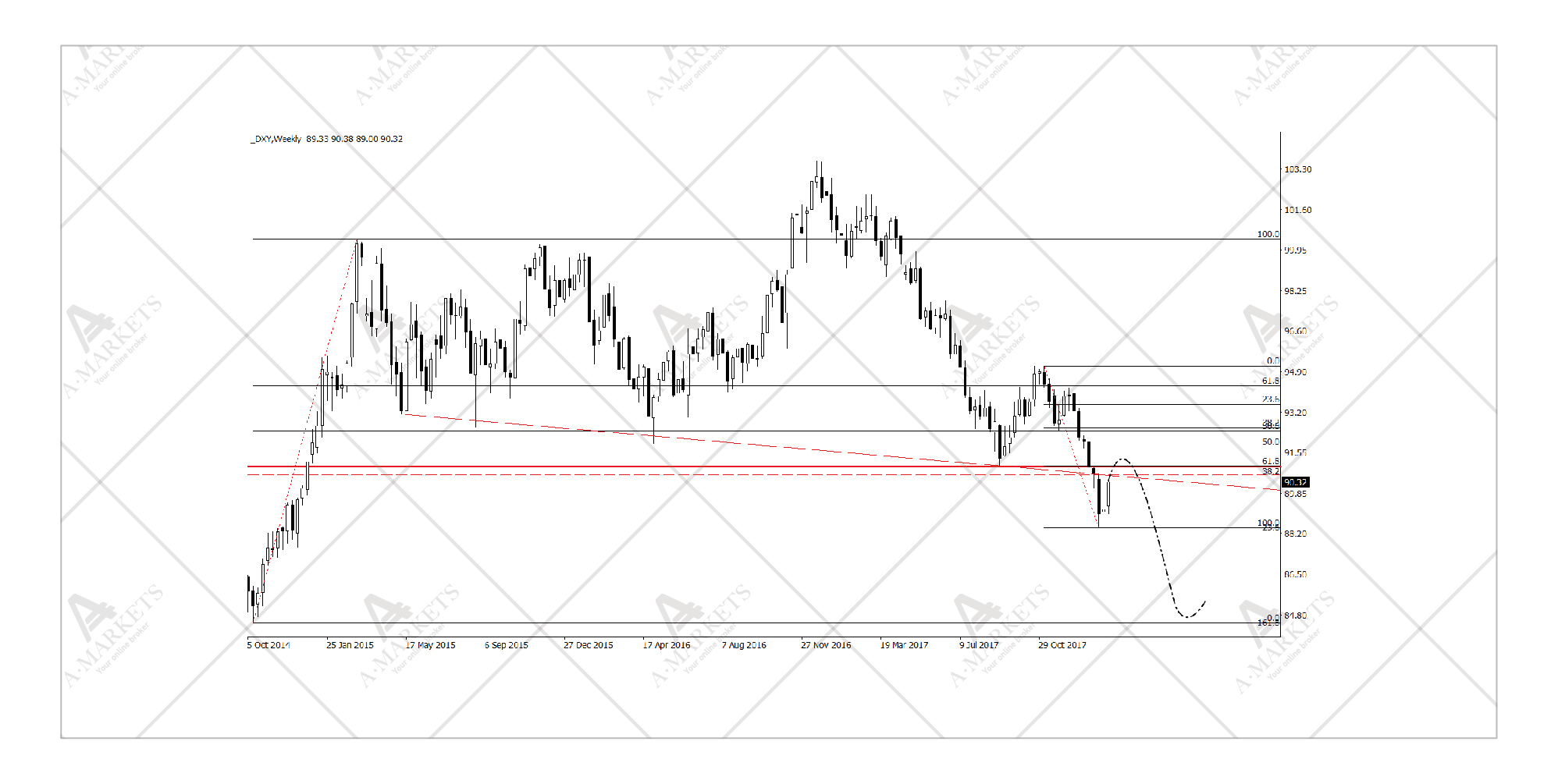 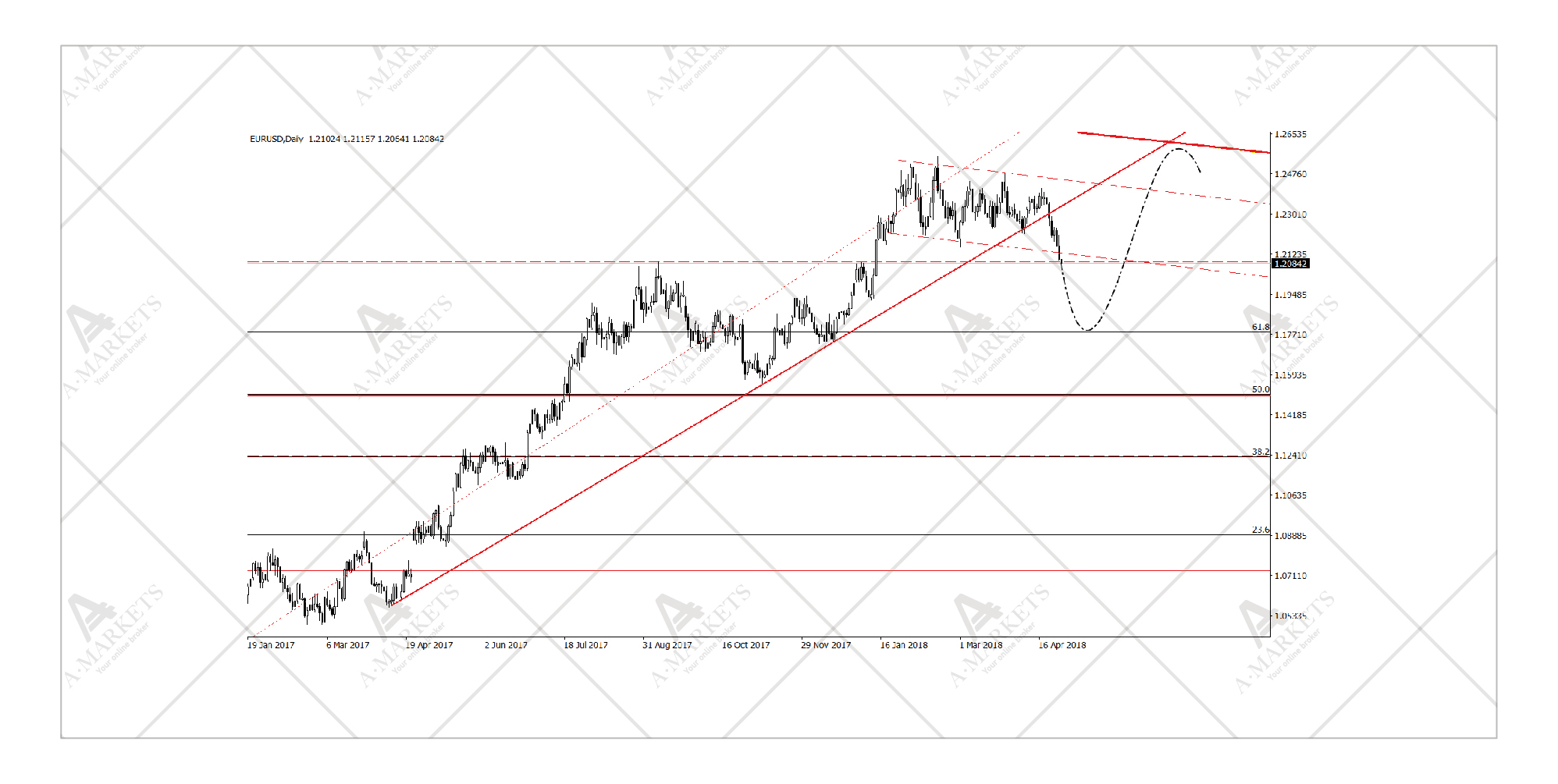 EURUSD had been fluctuating in a corridor just 3 figures wide from January 15 right up until the ECB meeting on April 26. The price range between the high and low was incredibly narrow standing at just 2.5%. Moreover, the prolonged consolidation weakened the corrective momentum considerably. We still mostly attribute this to the dollar’s fundamental weakness, and consider the recent price activity to be indicative of a strong long-term USD downward trend.

Yet that didn’t change the fact that the euro was overbought, and thus, any long positions weren’t tactically viable. Sure enough, just as April was drawing to a close, the expected drop happened. Due to lower volatility, however, its targets are more conservative now, with 1.203-1.206 being sufficient to satisfy technical conditions of a complete correction. At the time of writing, the area has already been rested. The next target lies at 1.179, and that is where we’ll readying our long position.

USDJPY: where the dollar rally should be the less pronounced. 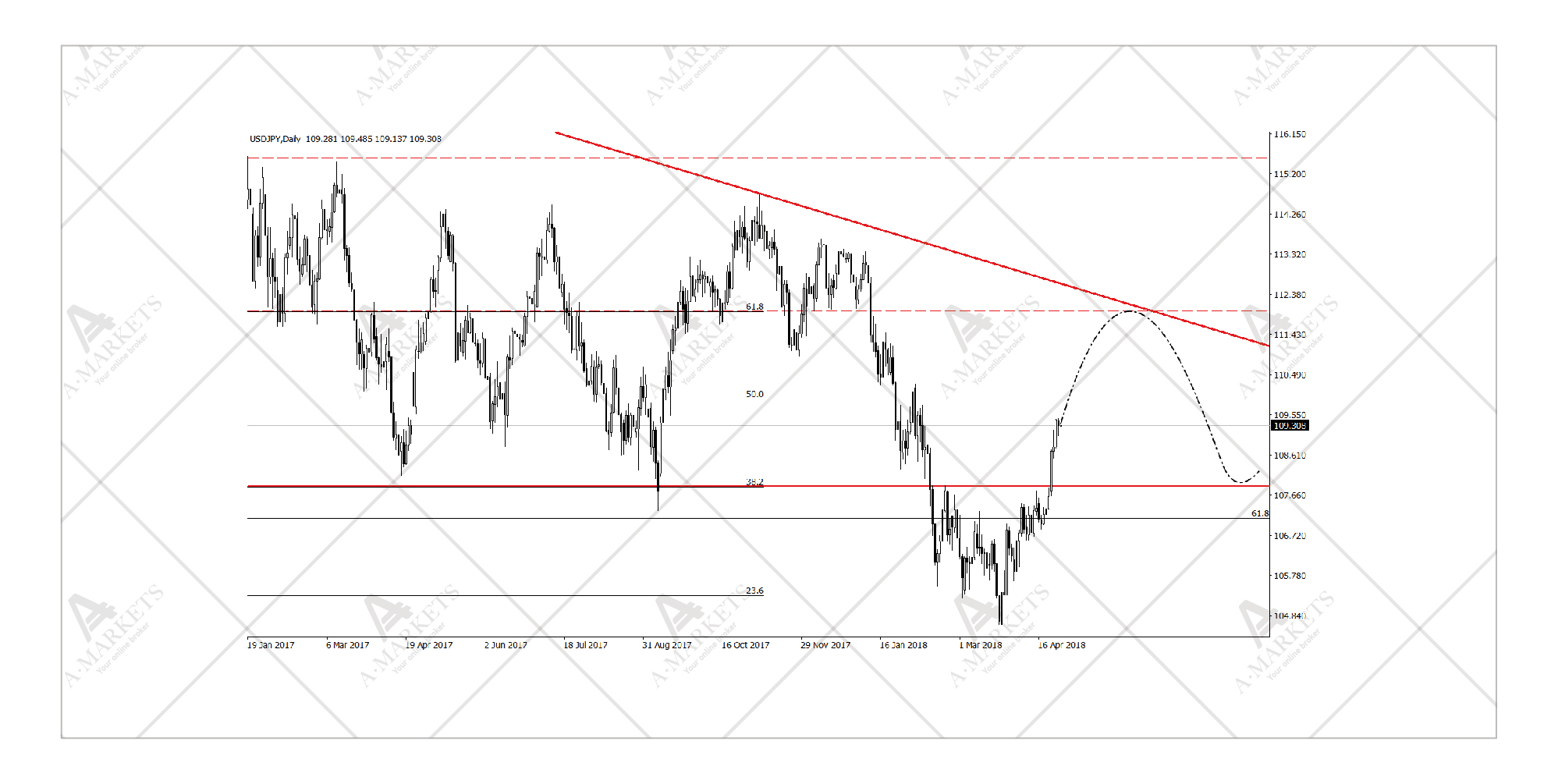 The Japanese yen has been unusually weak amid the recent weeks’ heightened geopolitical tensions. That is understandable: Asia was just about the only region unaffected by the general escalation. It’s especially important to mention the meeting of the two Koreas leaders at their historic summit, which has significantly lowered the risk of a local conflict.

However, the whole region of the middle Middle East could prove the dark horse. The problem on the surface is Syria, when in fact it is just a battlefield for not only many countries, but also for many conflicting interests. And we believe that it’s only going to get worse. Following Mike Pompeo’s announcement as Donald Trump’s secretary of state, we’re sure in for some alarming Iran-related
headlines soon.

This geopolitical mess should revive the demand for the yen. USDJPY is slowly crawling up thanks to a) the North Korea negotiations b) rapidly rising dollar rates. The current corrective strengthening of the greenback should run out of steam in USDJPY first, and that’s where one can consider going short around the 112 level. And vice versa, the pair managing to consolidate above the mark would be a clear sign that the dollar has, perhaps, ended its multi-month downward trend. This scenario, however, isn’t our base case. 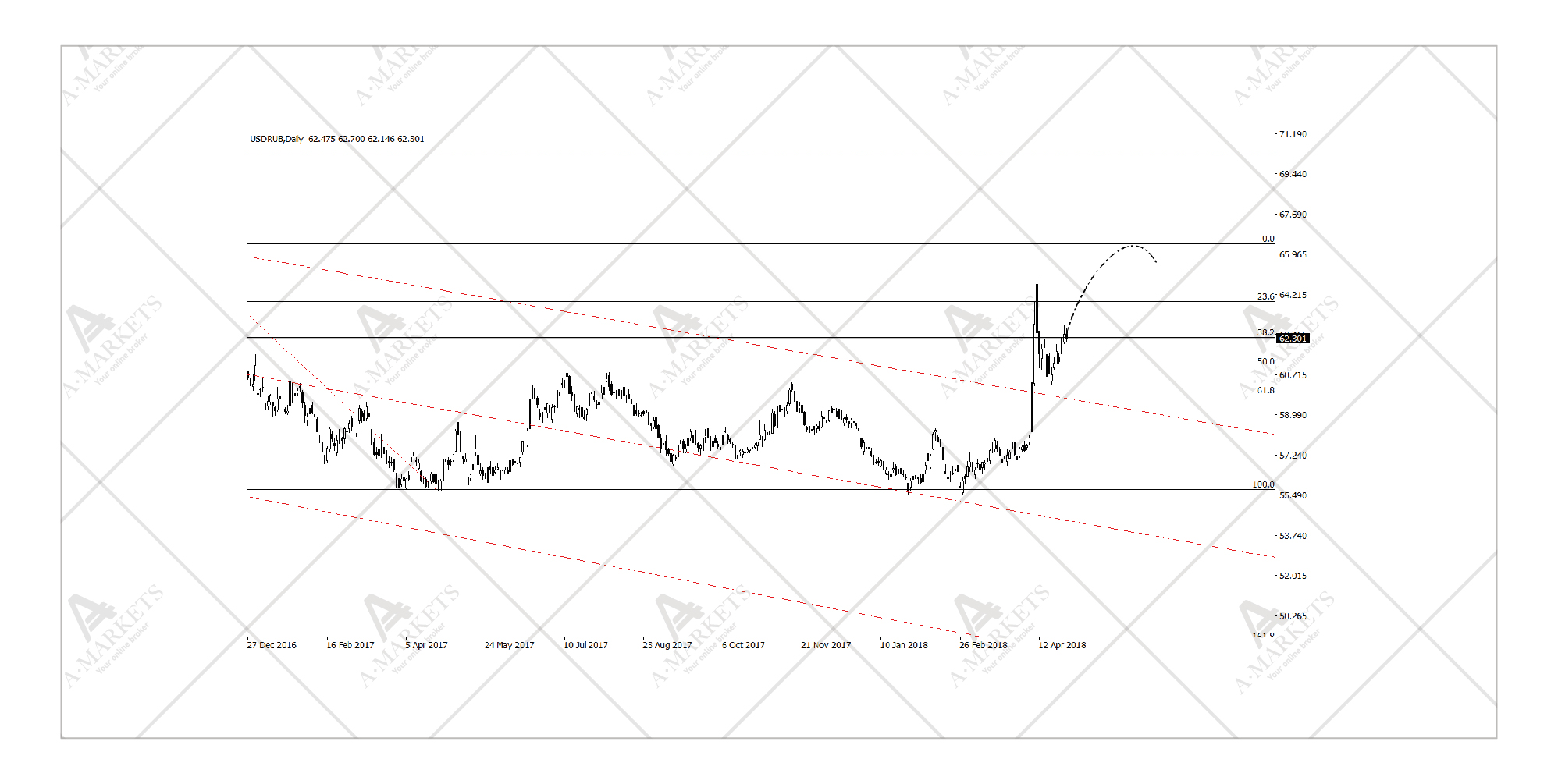 April was rough for Russian assets, specifically the FX market, which certainly took us by surprise. Moreover, the rouble has taken on most of the rebalancing (a lesser amount fell on bonds, while the stock market was essentially unaffected). Well, that’s a prime example of how Russian economy is set up to adjust to external shocks, with the national currency taking the first hit.

The correction has been spreading across many EM markets, and we expect to see another wave of the rouble sell-off. USDRUB is likely to re-test the 64 mark, and could even climb up to the 67 area. And yet as long oil costs at least $70, those levels will not be fundamentally justified. Inflation remains extremely low, and recent FX fluctuations have not changed the outlook at all. When the dust settles, foreign investors will flock back to the Russian market and demand for the rouble should pick up. Once the current corrective move is done, we still expect USDRUB to test the 53 mark. 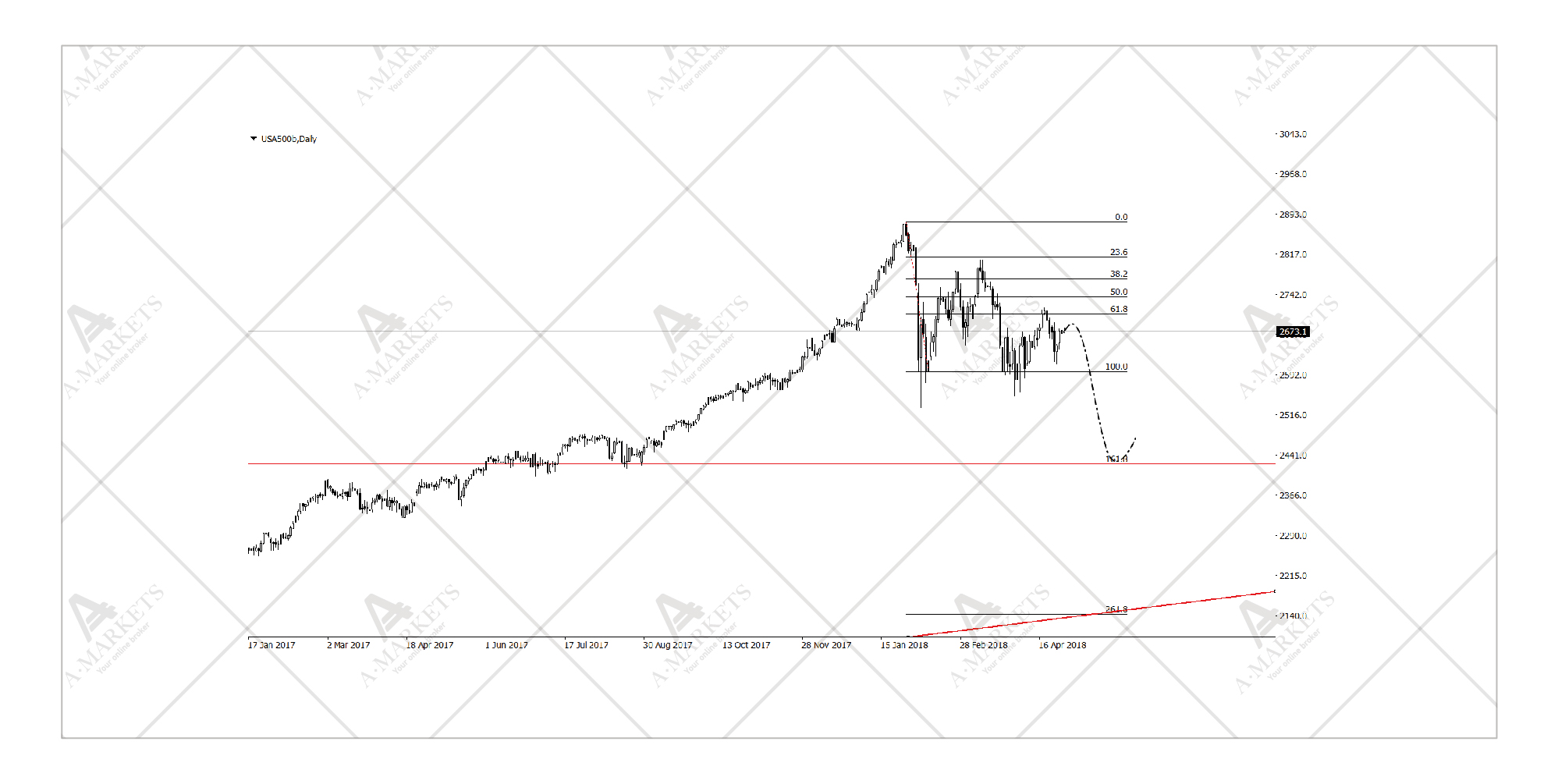 There’s an old Wall Street saying “‘Sell in May and go away”. And it looks like this year around it should actually generate some alpha. Systematic volatility rise is a clear negative for stocks (although this time around, ironically, it has been generated by the historically more stable bond market). Additionally, the 10-year treasury yields crossing the 3% mark makes it attractive to exit stocks and move into bonds, as the former are now weaker from the yield viewpoint.

From the technical point of view, the U.S. stock indices are finally showing clear signs of weakness. The targets of the January and March drawdowns both lie in the 2465 area. There are two intermediate stops at 2610 and 2562. Any meaningful close underneath 2460 would open up a whole world of possibilities for bears, although it’s still premature to discuss this. Given our estimates regarding the
economy’s rebound in H2 of the year, as well as the mildly positive forecast for the treasuries, the tactics would be to close out short positions around 2470 and immediately go long, buying strategically.